Using MSCs to Beat Cancer: The Next Big MSC Application

In the body, MSCs are known to home to sites of acute injury and inflammation and migrate to tumors in response to tumor secretion of growth factors, cytokines, and extracellular matrix (ECM) molecules. However, given their secretion of biomolecules that augment new blood vessel formation, increase inflammation, and degrade the ECM (lending to tumor metastasis), MSCs may promote rather than impede tumor growth and migration, and confounding results from a number of in vitro and in vivo studies have been published to date.  Furthermore, it has been suggested that the ability of MSCs to interact with malignant cells and cancer stem cells might preclude their safe therapeutic application, particularly in patients with dormant or undiagnosed cancers. Despite these concerns, MSCs can serve as an effective ‘Trojan Horse’ for the targeted delivery of anticancer genes, proteins and drugs to tumor cells.  Such targeted delivery can reduce the unsavory systemic side effects that often result from the use of anti-cancer agents, reducing patient morbidity and improving quality of life.

MSCs can serve as an effective ‘Trojan Horse’ for the targeted delivery of anticancer genes, proteins and drugs to tumor cells.

Recently, a review was published focusing not only on the application of MSCs for the targeted delivery of anti-cancer agents to tumors, but also on the molecular mechanisms of MSC accumulation in tumors, a poorly understood mechanism.  For MSC-based anti-cancer therapies to be effective clinically, these mechanisms must be understood and successfully exploited.  The authors identified several methods to genetically-modify MSCs that resulted in tumor growth inhibition, metastasis suppression, and prolonged survival upon MSC injection in various tumor-laden animal models.  However, in addition to modification with anti-cancer agents, MSCs must be able to accumulate at the site of the tumor for effective cancer eradication.   The authors postulate that increasing the accumulation efficiency of MSCs at tumor sites can effectively target not only primary tumors but also metastatic lesions. 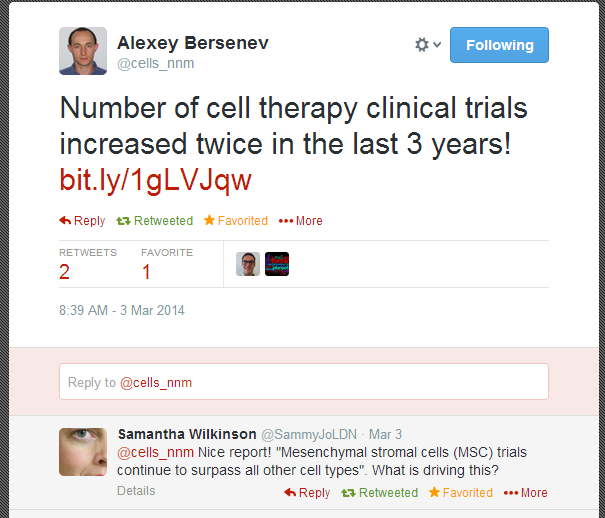 Prolific Stem Cell and Cell Therapy Blogger Alexey Bersenev (@cells_nnm on Twitter) has recently written a post on his Cell Trials blog titled "Trends in cell therapy clinical trials 2011 – 2013".  If you are interested in Stem Cells and Cell Therapy, it is highly likely that you already know Alexey.  He is one of the most passionate and dedicated technologists in the area.  If you don't know him,  you can follow his activities at the above links, as well as at his Stem Cell Assays blog and among several LinkedIn Discussion groups.  Alexey reported that his own research shows that Cell Therapy Clinical Trials that are listed in international databases have doubled from 2011 to 2013, going from of 161 to 324. Alexey evaluated the data by the split between industry and academia (three academic trials in 2013 for every industry-sponsored trial), by country, by region, as well as by cell type and clinical indication.  His analysis is very important because with his technical background and expertise (Alexey is an MD/PhD researcher who has been doing hands stem cell research or therapeutic cell manufacturing as his day job for several years), if anyone can correctly categorize a trial, it is Alexey.

When tweeting highlights of his Cell Therapy Clinical Trials blog post (above inset) an astute follower of his picked up on the fact that Mesenchymal Stem/Stromal Cell (MSC) trials are out-pacing the other cell types.  This fact is consistent with another often-cited recent manuscript printed in the journal Regenerative Medicine titled "The Global Landscape of Stem Cell Clinical Trials" (free download available here).  This manuscript also creates its own database and analyzes the various types of trials, with the conclusion that "most of the increase (in Cell Therapy Clinical Trials) since 2006 was due to trials using MSCs".

So WHY are MSC trials outpacing other cell sources?  There are several reasons for this.  We believe this is likely due mostly to: